The 'JOY OLPARK FESTIVAL 2017' was held on the 23rd and 24th last week at the Jandi Madang of the Olympic Park in Seoul. All you need is a picnic mat, to freely eat, relax and enjoy the green grass. Every year artists who take us away from the city covered the stages, and this year a very special guest made an appearance blazing the grass yards into a fire. It was PSY! 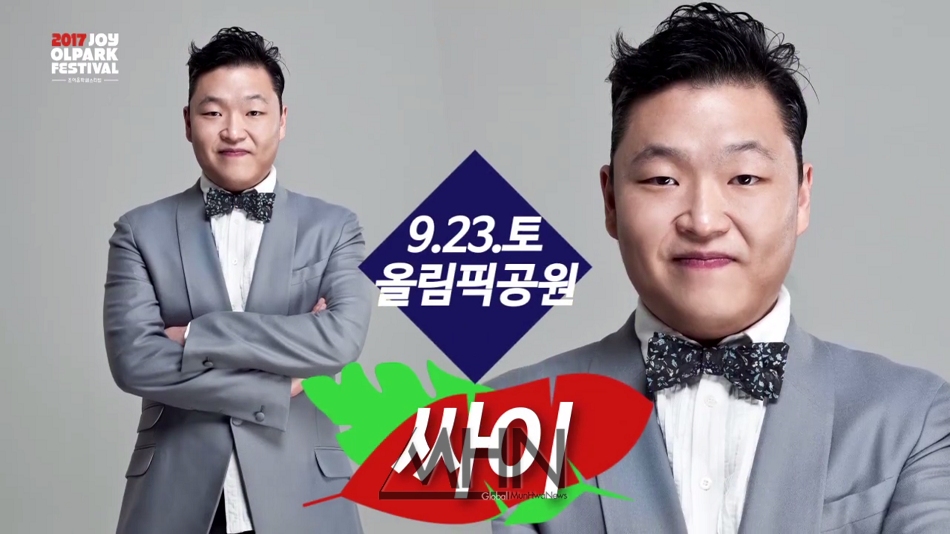 Could PSY possibly blend into a festival where people prefer laying down on their mats and almost everything is in green? The answer was yes! As the last guest to appear on the 23rd night, he sang 'I Luv It', 'New Face', 'Father', "Heaven', 'Gangnam Style', and other hit songs from other artists like 'Red Sun', 'Romantic Kitty' heating up every audience.

The people at the festival were people who knew how to party up even in limited space. The festival was one unique event where all guests gathered together in a family-like atmosphere. More artists like G.Soul, MAMAMOO, Sugarbowl, Yein, Forte Di Quattro, The Barberettes, took on the stage for the first night. There was also an inspiring talk show with comedian Jung Chanwoo and writer Kangwongook.

This year's JOY OLPARK FESTIVAL was hotter than ever thanks to its impressive line-up guests and crowds were filling in fast to see the artists which led to complaints. Not enough parking space was provided and illegally parked cars were everywhere around the Olympic Park area. The festival did recommend taking public transportation on the way but being it a picnic mat-themed event already had many hands full. The festival answered "Usually, the Olympic Parking lot is enough in running the event so we didn't have a second thought of the shortage of parking. We're guessing more visitors must  have come over the weekend to the park as well." Other events did take place on the same weekend around the Olympic park, probably why parking space came so short.  ​

On the second day of the festival, Choi BaekHo and Echobridge, Ali, Sweden Laundry set up a special joint stage. Jaurim, DEAN, Daybreak, Heize, Bily Acoustie, 1415 and more aesthetic musicians will also be there. Along with the music performances, lively talk sessions with Kim Jaedong and Park Myoungsoo will also join the festival for the 4th time as a mentor.

The JOY OLPARK FESTIVAL also provided a 'Therapy Zone' for those who need comfort, and a 'Play Zone' for all families to enjoy more of the event. This year again, the festival will be donating some of its profit to 'Loving Snail' a charity organization for the deaf supporting our society.