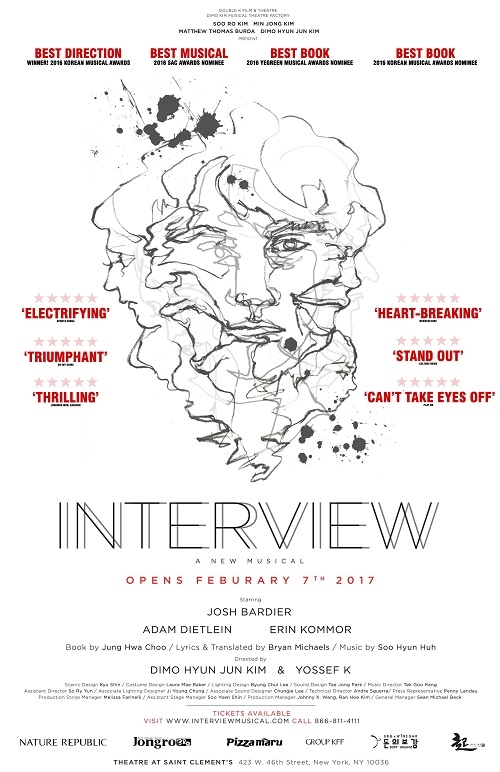 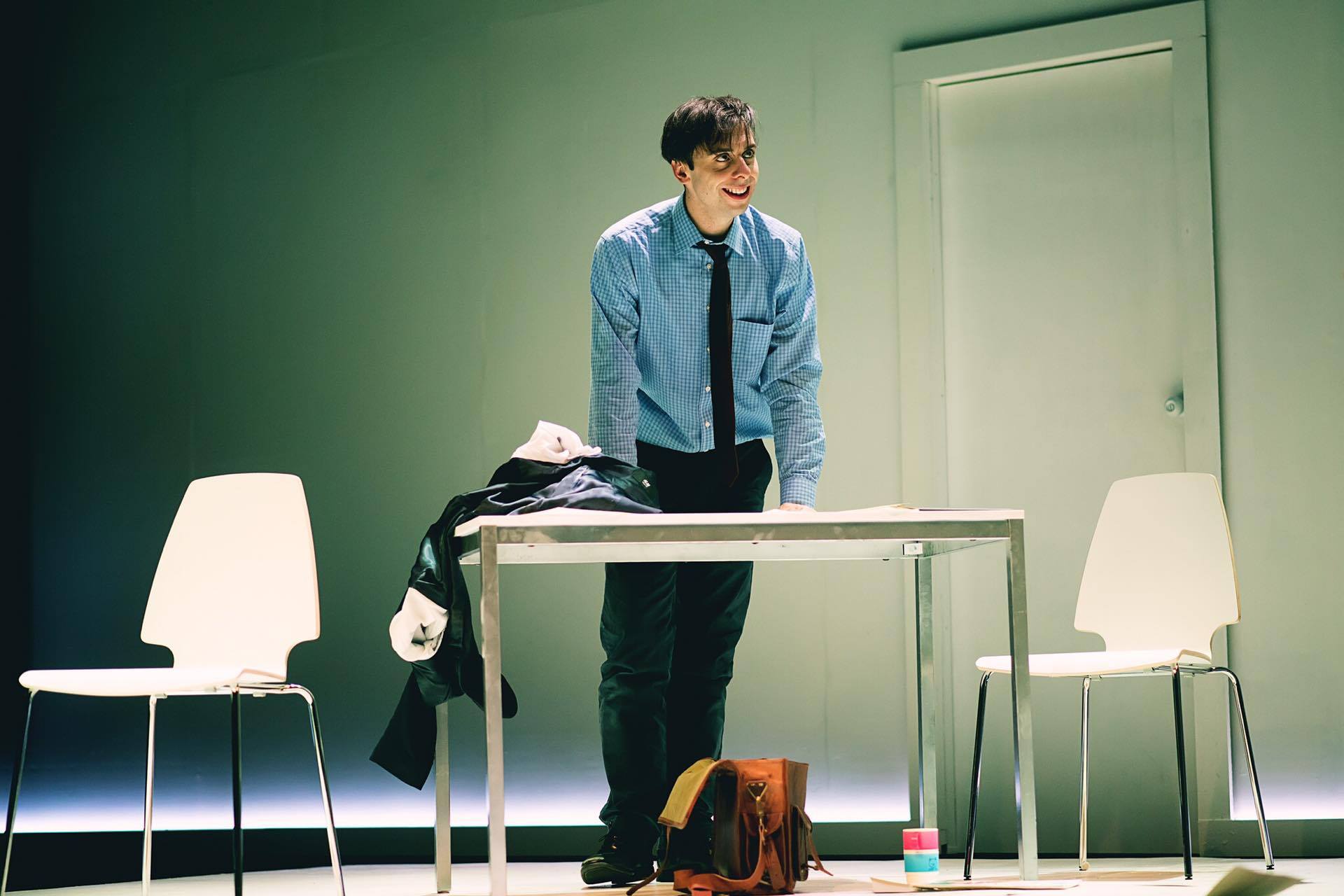 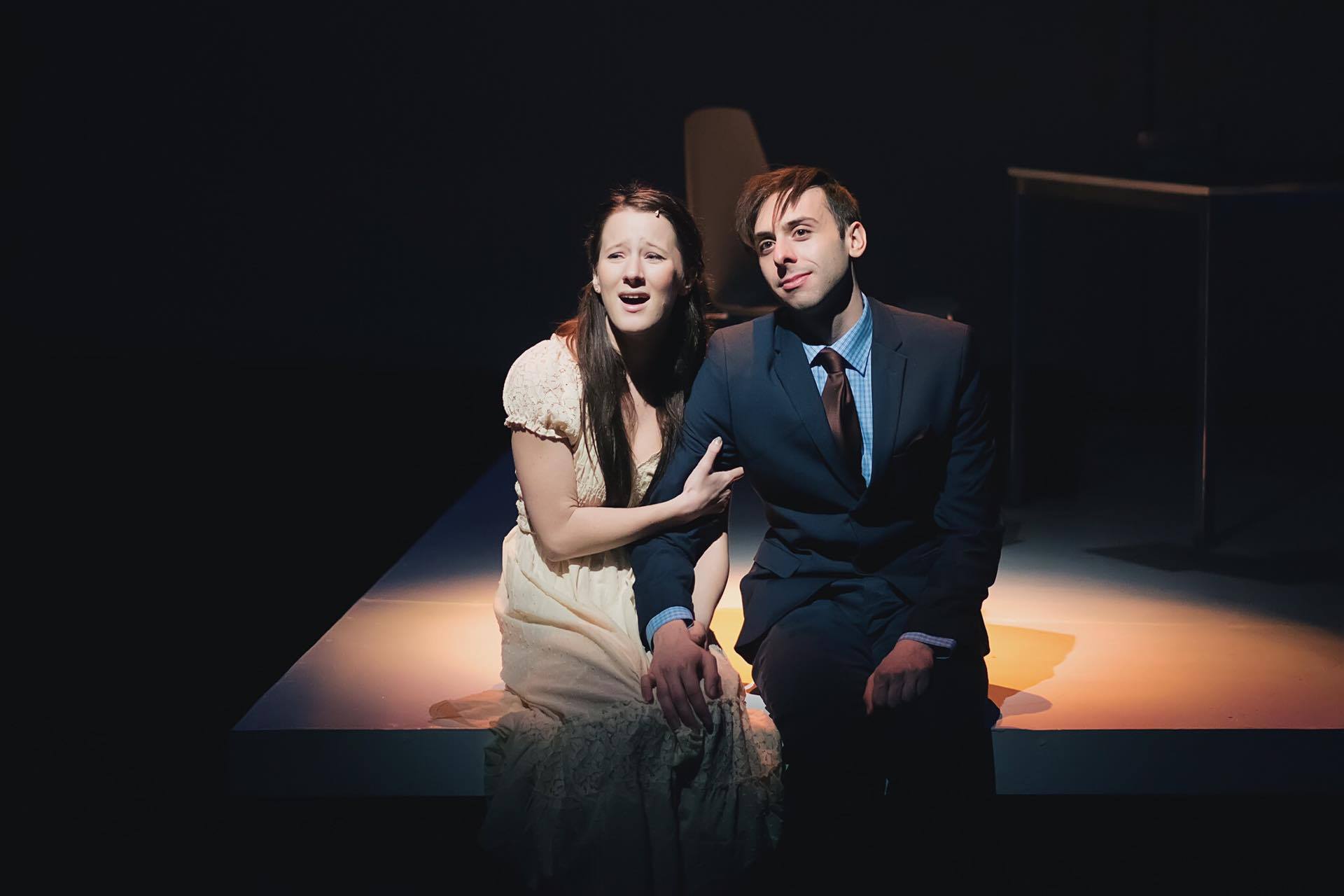 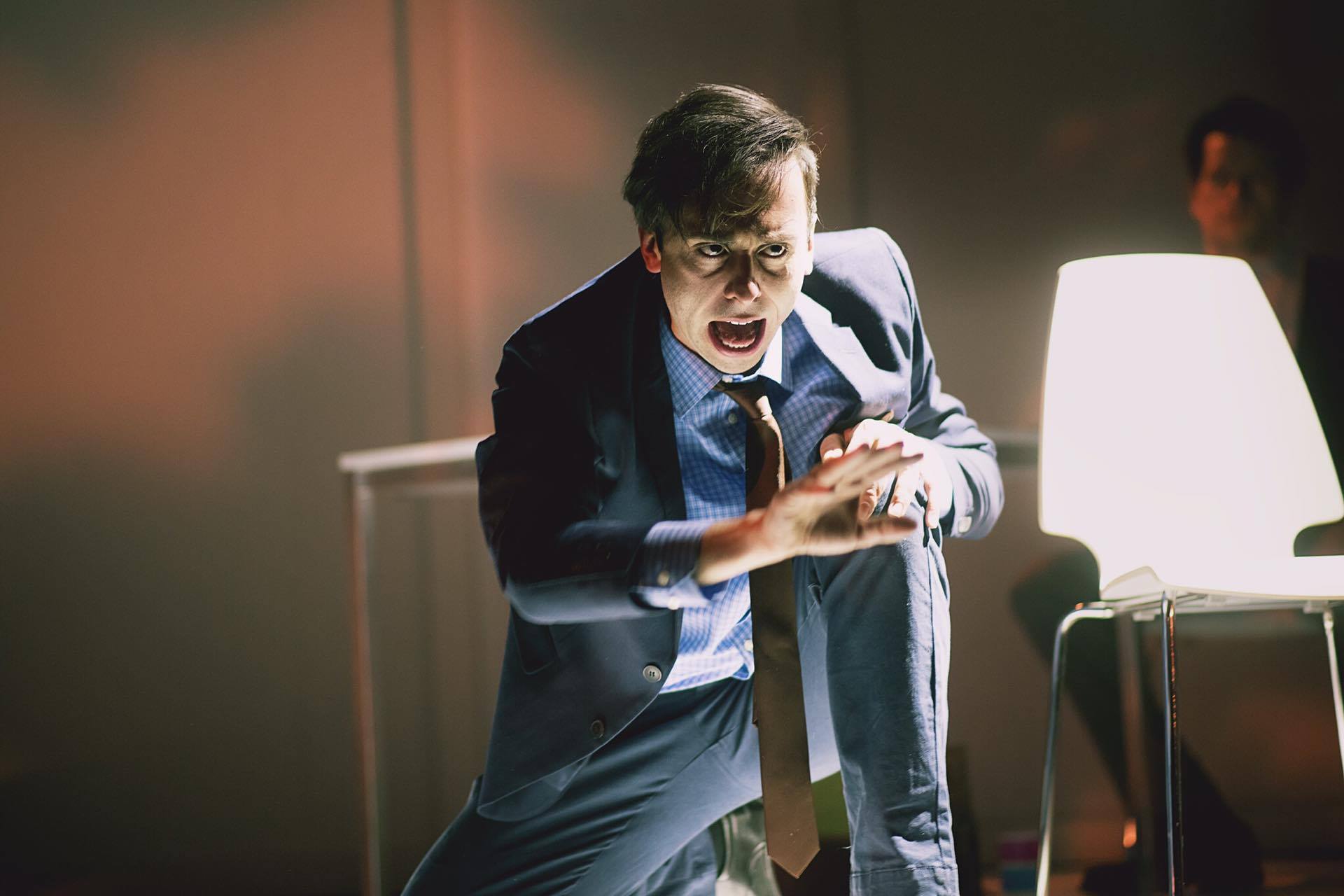 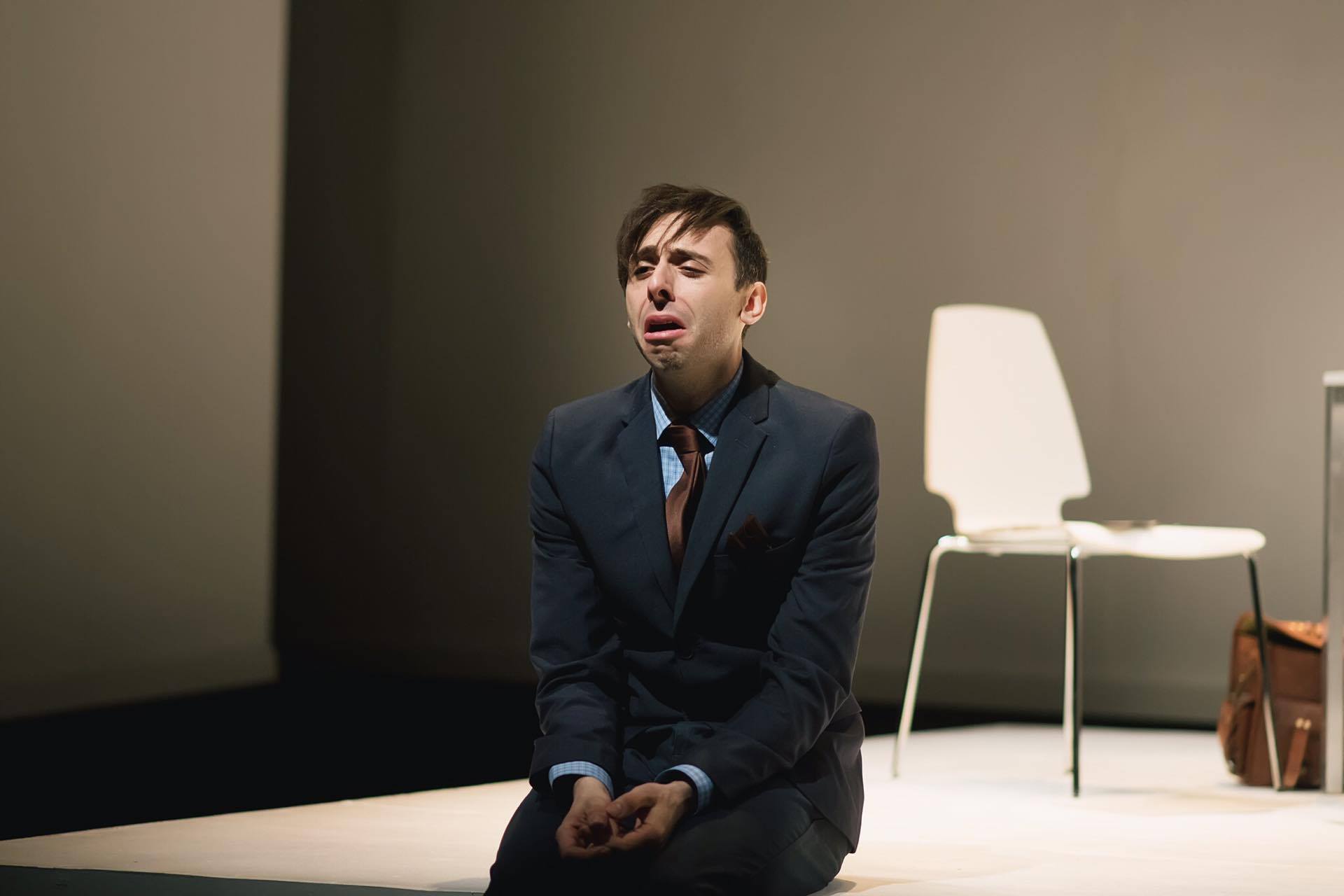 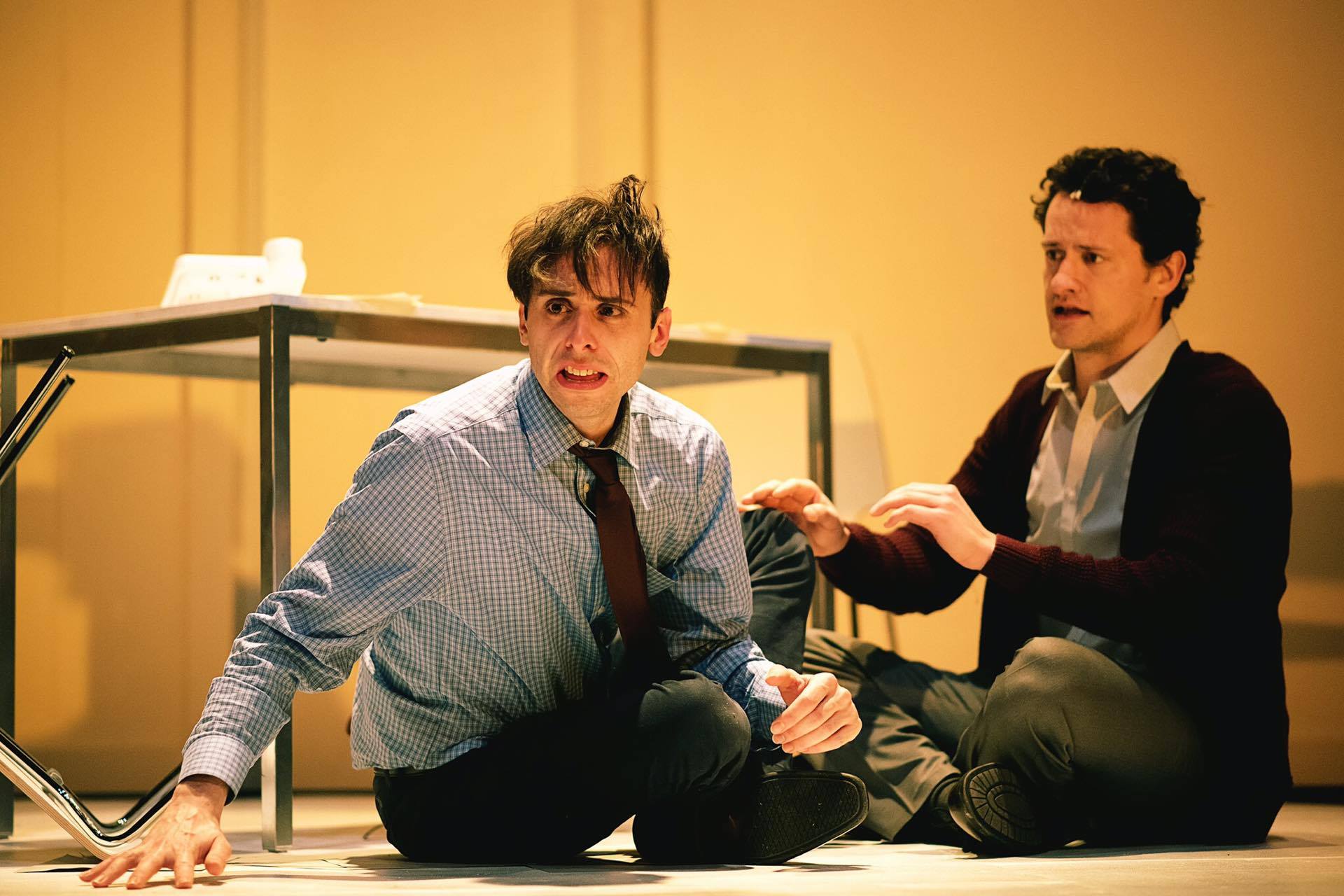 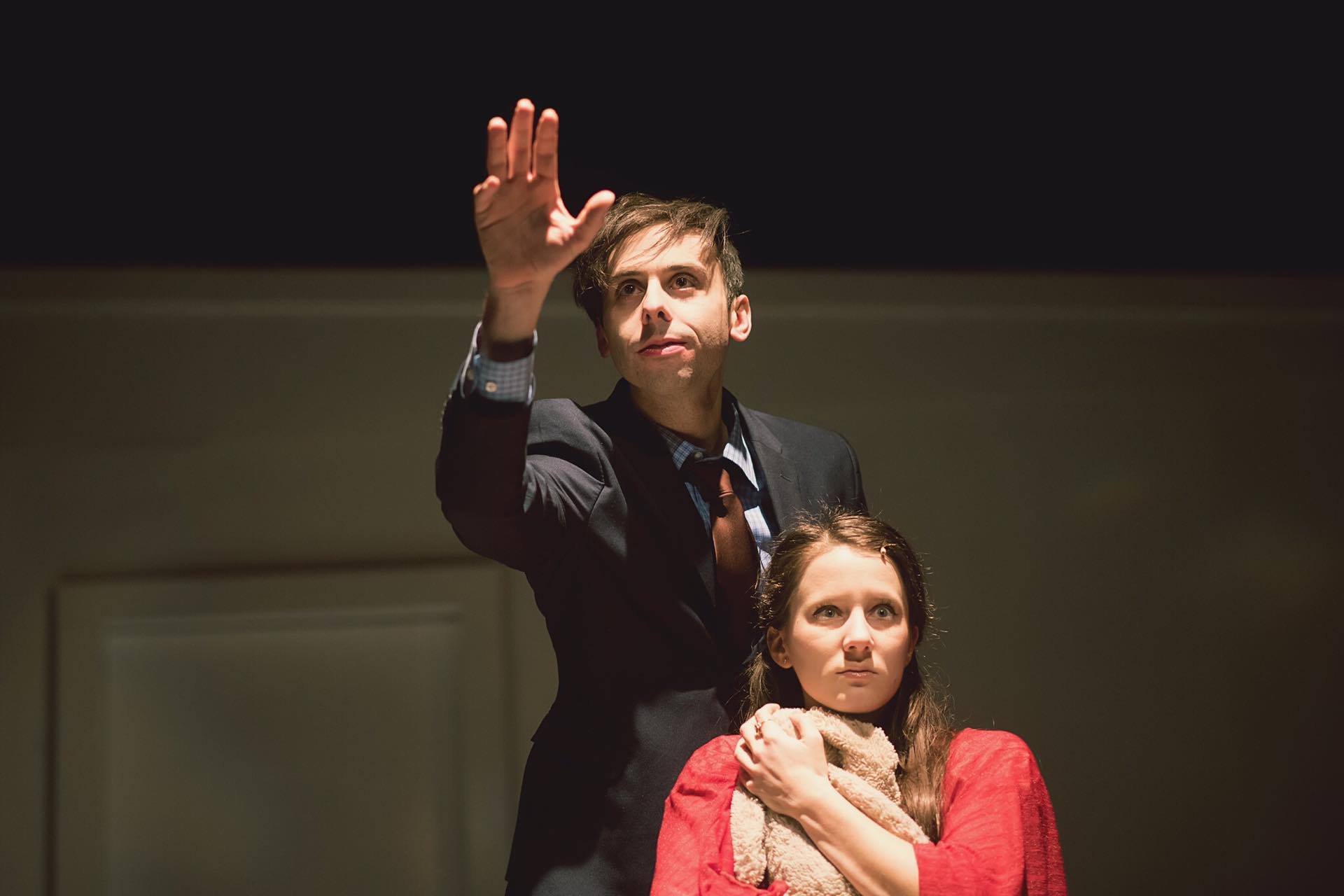 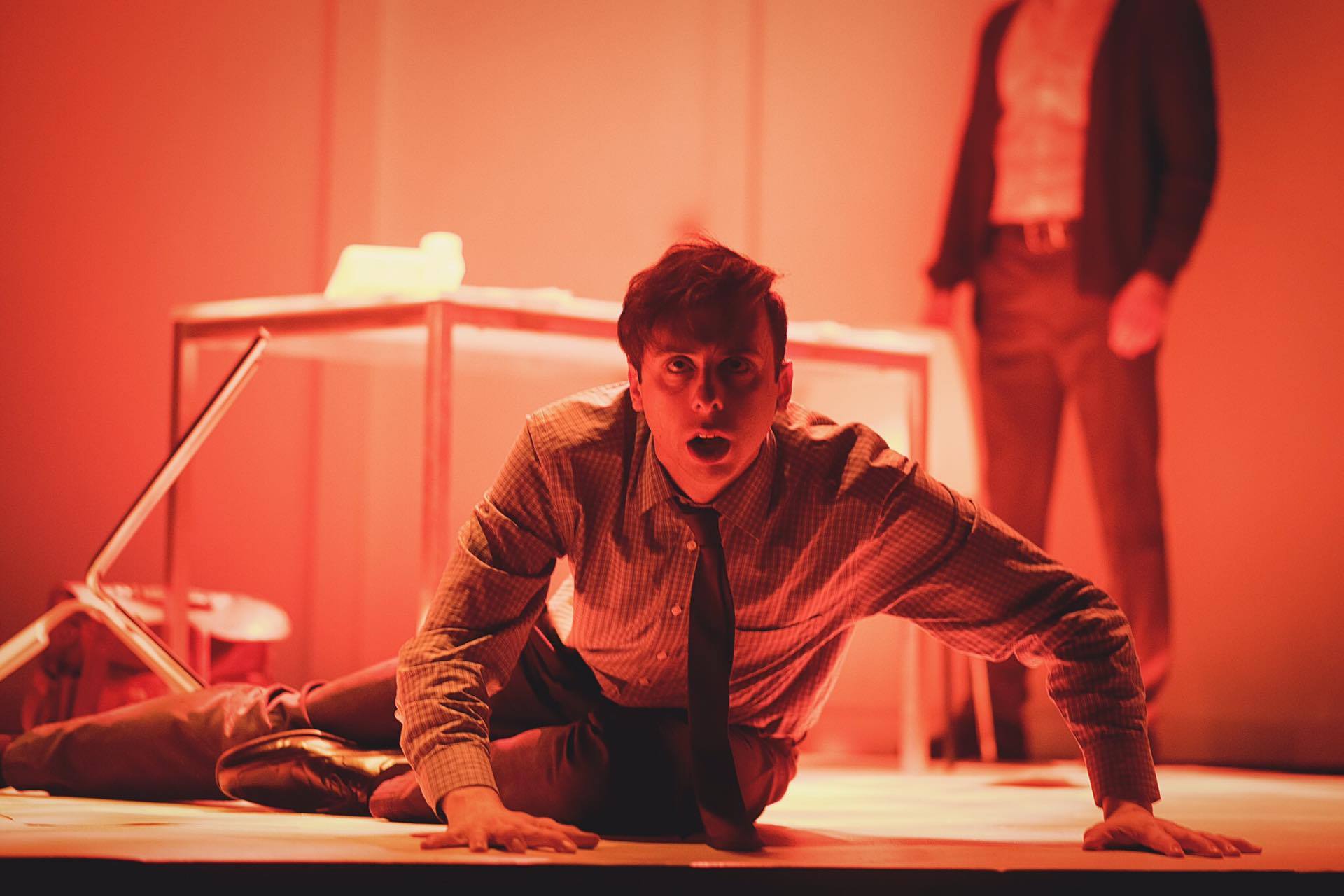 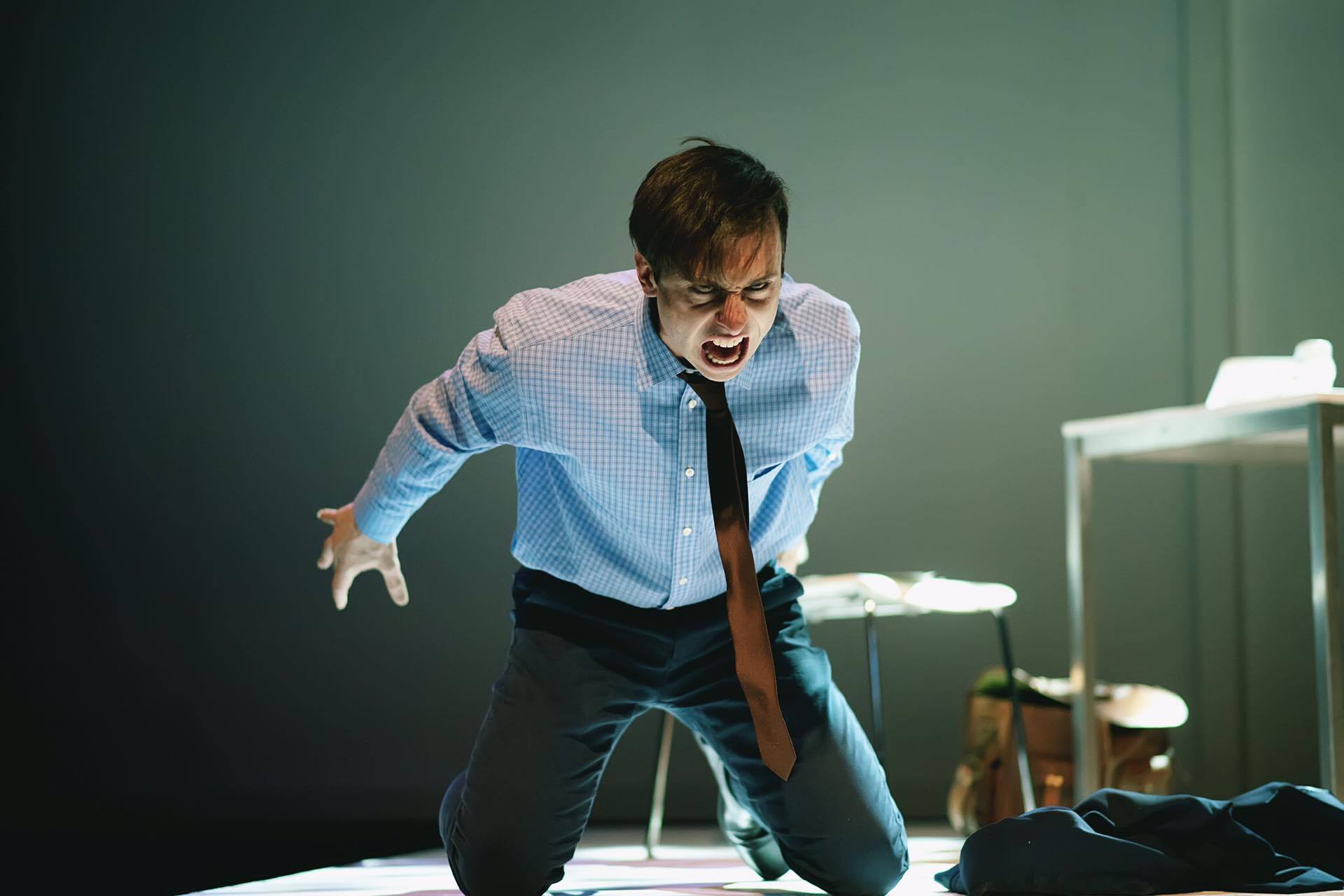 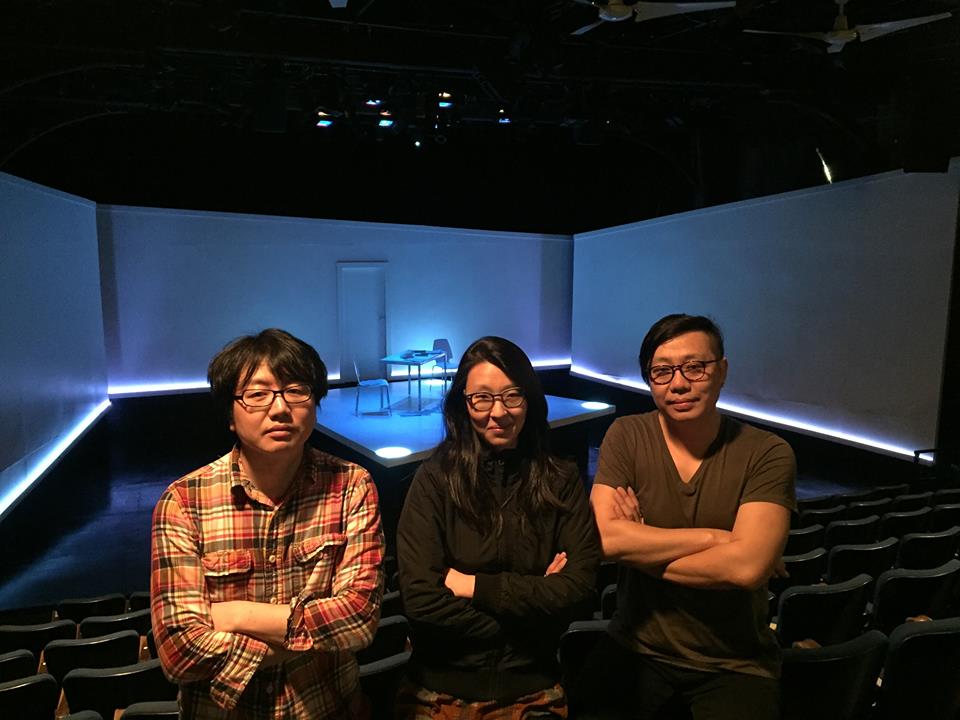 This coming 5th will be the last day to watch “Interview” co-directed by Hyunjun Kim, a once hot topic all over the world in producing the musical “Comfort Woman” and “Green Card” and Yossef K who created the play “Q”.

Now playing at the Theater at St. Clement’s, the musical “Interview” will be on stage from February 10th to the 5th. Written by Junghwa Chu and music by Soohyun Huh it is an original musical that was first shown in Korea back in 2016. It’s the first Korean musical to be translated into English and make it to New York’s off-broadway stage. After its first show at Hyundai Card Understage as Producer Suro Kim’s curating musical, it stretched out to Kyoto, Japan and received acclaim. Suro Kim and Minjong Kim participated as a producer this time.

As Josh Bardier, the lead is being praised for his stage presence, here we exclusively introduce the six Koreans who are making way at off-Broadway. Sound designer Taejong Park, Associate Sound Designer Chungjae Lee, Light Designer Byungchul Lee, Associate Light Designer Jiyoung Jung, Stage Designer Seungkyu Shin, AD Sori Yoon are the main creators. Most of them are actively producing musicals in New York City. Here’s their stories of working on “Interview” and advice for those who dream to fly over to New York City’s musical stage.

How did you get to direct in “Interview” as a Sound Designer?
ㄴ While working in the States for seven years, I never had a chance to work with Koreans. I thought I could be some help to the Korean producers and staffs who were just starting in America, so I joined.

Which scene did you focus the most sound-wise in the musical “Interview”?
ㄴ There’s a certain aim of the production. The whole set of the stage is an inside of a man’s head. So we included the audience as part of the stage as well. With the ‘surround system’ we filled the audience seats and tried to focus on using the space. I didn’t really concentrate on one particular scene. Plus the band is right next to the seats so I tried to think of the acoustic parts (of the sound).

You worked both in Korea and in America as a Sound technician, what’s the biggest difference?
ㄴ The way people think I guess? The way people think what a sound designer is. Many of the designers here in Broadway played musical instruments or wrote songs. I also could start this job because I played and wrote music too but here, people take sound designers and mixing engineers as musicians too. Even the crowd who come watch the show think that way.

You’re the first Korean to make it as a Broadway mixing engineer (‘It Shoulda Been you’), off-Broadway sound designer (‘Silver Cord’, Greencard’), off-off-Broadway sound designer (‘Ordinary Days’, ‘Brooklyn Play Festival’) etc. Any words for those who dream to make it in the New York musical scene as the only Korean sound designer in New York?
ㄴ When I first came to work here, nobody was here to give me tips and I had no information about anything so I was devastated. But now come to think of it, that wasn’t important at all. What you want to do is really important. Ask yourself what you want to do all the time. And if you found something you want to do and like to do, trust in yourself and keep on. And if you want to come work here, do the preparation well. E-mail me if you’d like.

Why should people come see “Interview”?
ㄴ Personally, I never worked so hard, excruciatingly, so I want people to come see it. The actors, staffs, producers, all worked really hard. Everybody spilled their guts for this.

How did you get to join “Interview” and what is your role?
ㄴ I am working as an Associate Sound Designer by helping out Taejong Park from Sound Park NY.

How was the working process of “Interview”?
ㄴ It was entertaining to work with young and passionate staffs. I am learning as I am participating.

What’s your favorite number in “Interview” and why?
ㄴ I love all the songs and they go well with the musical. But if I have to choose one, I would pick ‘ the City of Angel’ sung by Joanne Bevington. The reason I like this song is because it’s the only ballad song from the musical, and I think Erin Kommor did a good job interpreting this song. I feel Joanne’s deep sorrow and I can picture Los Angeles.

What was most challenging living in America?
ㄴ I came here as a student. Currently, I am finishing my studies here. Language is my biggest barrier. Because English is mandatory to communicate and meet many people and share a conversation. It’s not easy to learn and adapt a new language. But except for that, there’s much more to see and learn than to be held down. I am thankful for that, and I have hope for my future days here in the States.

How did you get to participate in “Interview”?
ㄴ Hyunjun Kim and Taejong Park asked me to join so I did.

What did you try to focus on the most as you designed the lights for the stage? Where do you seek inspiration?
ㄴ The stage designer said the theme was to illustrate the inside of the man’s head. I also tried to depict the cases that happen inside of the head with color and lightness.

Many characters are in “Interview”. How did you try to emphasize each feature of the characters visually?
ㄴ Each character has its own personality. So I used colors that signified each character. For example red for ‘Jimmy’ who’s a strong person, yellow for ‘Woody’, pink for ‘Ann’ and white for ‘no name’. And I used a lot of shadow with light. Through shadows, I wanted an effect of another ego following the body.

Any words for those who want to come to New York’s musical scene?
ㄴ “Be prepared” … Just kidding. But you really need to be. Don’t chase dreams that are ambiguous.

Why should people watch “Interview”?
ㄴ It’s the first show to be translated from Korean to English. There were many Korean shows but a lot of the audience couldn’t understand it because it was in Korean. But since it’s performed in English, the audience are open to it. Many Korean staffs working in New York bonded together for this so come and watch it!

How did you get to participate in “Interview”, and how was the work process?
ㄴ I got to join as the Associate Light Designer thanks to Light Designer, Byungchul Lee’s recommendation. There were numerous idea meetings and design work during prep, and it was fun to work the very details of the show. But it was tough to finish everything in a very short amount of time once we got into the theater. I think everyone’s motivation helped to finalize things well.

What’s your favorite scene of “Interview” and why?
ㄴ I wanted to portray the parts when characters change to another character effectively. I like the scene when the man changes into ‘No Name’ because it really illustrates well on what this personality’s senses and the world are about.

Future plans?
ㄴ It was my first time to work with Korean producers in the States and it was fun. I want to do more Korean shows.

How did you get to come to America? How did you get to work as the Stage Designer of “Interview”?
ㄴ I had an ordinary job in Korea, and I came to New York to watch a show and stay for just six months. Things happened and I ended up living here. The reason I got to participate in “Interview” was because Light Designer Byungchul Lee introduced Hyunjun Kim the director to me, and it was interesting for a Korean show to play in New York in a ‘New-York’ version.

What did you focus the most on designing “Interview”? What inspires you?
ㄴ There were several tests to go through for the final design to come out but I wanted to keep the main theme Hyunjun Kim and Yossef talked about. I wanted to make space for ‘Matt’. He needs to express five different characters so I didn’t want the stage to be carrying one state. Did a lot of meetings with the directors, and light designers. I wanted to give a strong contrast in black and white of ‘Matt’s abnormal, and tangled mentality with the crooked angled stars. I did a lot of research for inspiration and I think I got it from there.

Any words for those who want to work in New York’s musical scene? Tell us your future plans.
ㄴ As many people say, it takes a long time to say you’re in the stage to realize “I’m actually doing something.” I am enjoying that time with patience. I want to suggest to challenge yourselves with a heart to enjoy things at a slow pace.

Tell us what your role is in this production and what you do.
ㄴ I mainly help the director and I do everything, anything the production needs. An AD isn’t important as Stage Directors nor do anything creative as designers. So many people might be curious what we do. To break it down easy, an AD is just a trainee under the director. So as I said above, there’s a reason I do everything.
A great director knows all of what is going on in the production and conducts it, so if anyone needs help I just go into it. That is how this job starts. As you start doing everything, you not only learn about various areas but also build on love for the show. You get to see yourself grow in bits without realizing it. And as most ‘Assistant’ titled jobs are; to assist areas of work to operate smoothly, my job is to assist so the director gets to work under the best condition.

How did you get to join this production?
ㄴ I’m actually working with Hyunjun Kim for three years. “Interview” is the fourth show I’m doing with him. I first started with Hyunjun Kim’s debut, “Comfort Women” as the music director’s assistant, then the stage director’s assistant in last year’s musical “Green Card”, and this time for many reasons I got to be the AD to help Kim up close.
I’m spending each day with much pride as I get to learn more by working with Yossef and Kim for this production. It’s not easy to do a job you like, but I’m grateful to all co-workers who are leading this production and to have a chance to chase my dreams in this foreign land with great passion. I’m working harder with hopes that more chances will open up for original Korean musicals.
Every producer including myself is giving their full efforts for this because it is the first original musical to have successfully toured both Korea and Japan in America. Many people are worried because it is a co-directed production but I am not lying when I say that the synergy of the two is amazing.
It’s incredible to witness the actors grow on every rehearsal. Lastly, the energy that the actors are spilling out make each scene unforgettable, so I am sure you will be able to experience a different type of a thriller musical.